After nearly one year of travel in Southeast Asia it was time to move onto East Asia with Taiwan been our first stop. Taiwan had not originally been in our travel plan, but after hearing many great things about it we made the easy decision to add it on. Kaohsiung, the southern most city, was our first destination and we afforded ourselves two weeks to get to know the city and it’s people.

Our home for our two-week stay was a two bedroom Airbnb apartment located opposite the 85 Sky Tower (Read our accommodation review here). Over the course of our two weeks we spoke to lots of locals who were incredibly friendly and helpful, often prepared to go our their way to help out with directions or translations. We also meet people who would just like to stop and talk to us about where we are from, why we chose to visit Taiwan and what our plans were during our time in Kaohsiung; then often offering recommendations on attractions to visit or places to eat.

Cijin Island is located within the Kaohsiung harbour and is a very short 5 minute ferry ride from the main land. The island gets extremely busy on the weekends as it is used as a day escape from the city for locals. Electric scooters and 2 or 4 seater electric buggies are an extremely popular mode of transportation to hire during your time on the island with the going rate of $100 NTD ($4.80 NZD) an hour. The island has a well-worn attraction path to follow which hits the main spots and all are pretty close and convenient to one another. We decided to visit the Kaohsiung Lighthouse, Cihou Fort, Star Tunnel and the Rainbow Church. The lighthouse and fort are a small climb from the roadside but you are rewarded with some great views of both the South China Sea and Kaohsiung city. Braxton especially enjoyed exploring the fort and its bunkers and imagining in the years past what the soldiers stationed there did.

The Star Tunnel is located underneath the fort on road level and provides a passage through the hillside to the ocean. A section of the tunnel is also covered with neon coloured stars showing the different constellations with the use of black light. With the tunnel being only 50 odd metres in length, we only stayed for 10 minutes before moving on.

Cijin Island has a brilliant boulevard for walking and riding along which runs the length of the beach, so we made great use of it along with many other visitors to the island during our visit. The Rainbow Church is two piece art installation in bright colours that provide not much more than a photo opportunity, so we obliged with a photograph or two of both churches before having to return our bikes.

We really enjoyed our time on the island so decided to visit a second time during our stay in Kaohsiung and which meant we were not so rushed the second time around after deciding to visit the windmill farm. Unfortunately this was a little bit of a fizzer, with only half a dozen small windmills, I would not really classify it as a “farm”, but below it was a lot of sea creature statues that the boys enjoyed climbing and exploring. On this occasion we had hired a 4-seater electric buggy, so both boys enjoyed having a turn at “driving” along the quieter parts of the coastline paths before we returned it. We then enjoyed some dinner and watched the sun go down over the old fort.

Kaohsiung is definitely a vibrant, art city and nowhere illustrates this more that the aptly named “Art Center”. This area has been reinvented into a bustling and engaging place to visit that contains numerous street art sculptures, designs and art work. The old railway lines have been turned into sculptures depicting everything from a suitcase to a megaphone to a spinning top.

The lines then lead onto the main area which contain more paintings and murals along containers, buildings and the old warehouses; even the odd Transformer sculpture.

There was so much to see across these areas that we spent two days exploring the streets, not knowing what was going to be around the next corner. We all enjoyed how regular, everyday items, such as gas/water meters and manhole covers have been turned into colourful art works. 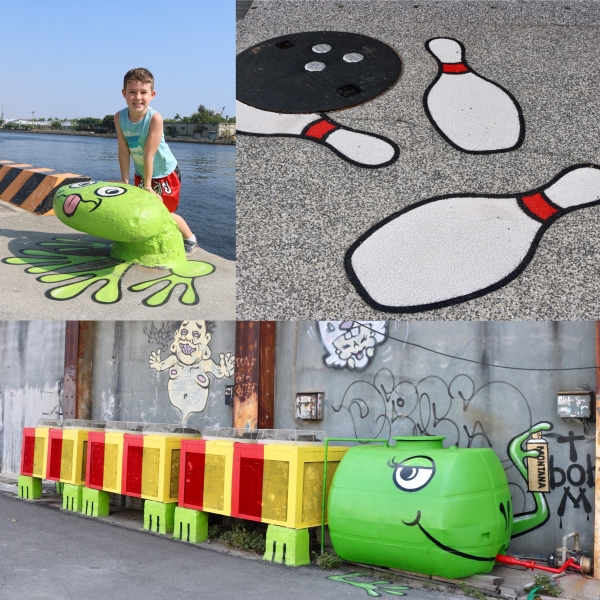 The kids even found a miniature ride-on train, and with Taiwan having much stricter health and safety than Southeast Asia, the children needed to be accompanied by an adult. Paula drew the short straw and jumped aboard the Kaohsiung Express for the 10 minute train journey around a small section of the artworks.

Lotus Pond, located within the northern districts of Kaohsiung, is home to various temples, pagodas and places of worship. Our first stop here was the Dragon and Tiger Pagodas, where you enter through the dragon mouth and exit through the tiger mouth symbolising turning bad luck into good fortune. These twin pagodas on the waters edge seemed to be by far the most popular attraction on the pond and although they are free to visit, donations are requested. Also located on the pond is the Confucian Temple which is a replica of the original temple built in a different area of Kaohsiung. It always amazes me the architectural symmetry and detail used in temples and the Confucian temple is a great example of this ingenuity.

There are many more pagodas and temples to see around the pond, but after visiting countless over the past year, we decided to skip the rest. You are able to walk completely around the pond, which at about 4kms would normally be a pretty easy stroll for us, but with a searing heat in the high thirties and little-to-no shade along some of the pathway, it proved to be more of a mission than we originally thought. So the final order of the day was ice-cold water and ice creams.

With the school of Mum and Dad back in full swing during Kaohsiung we decided to take our school of two on a field trip to the Science and Technology Museum. At only 270 NTD ($13 NZD) for our family it was a very budget friendly activity. The museum itself is absolutely massive and is spread over 6 levels of a very large building. Some activities within the museum cost extra such as ‘moon walking’ and a giant spiral slide, however there was still plenty to keep the children occupied. While there is a lot of information in English within the museum, unfortunately most of the interactive experiences are solely in Chinese. We did however manage to complete a food game show against one another where we randomly picked “yes” or “no” answers to a question in Chinese. Braxton came out the winner with 8 out of 10 questions correct stating “I can’t believe you didn’t know that” after each question we got wrong to his correct guess. After three hours at the museum we still had not seen it all, however with the displays and lights been turned off as closing time approached, it was time for us to leave. 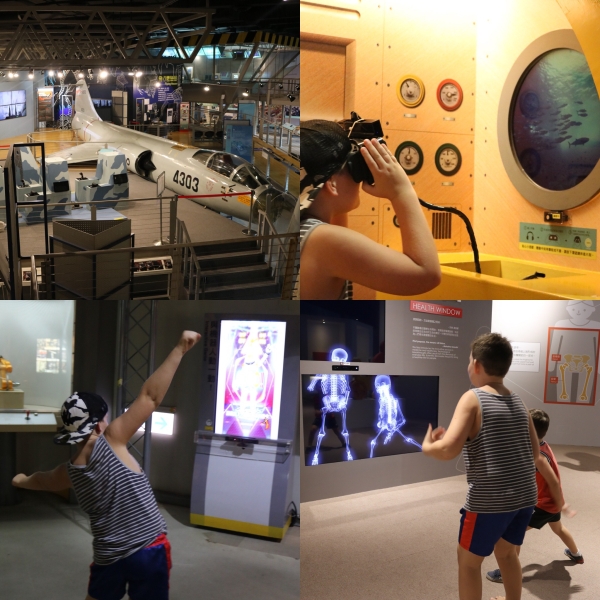 Kaohsiung was definitely a great introduction to Taiwan and the decision to visit has already proved to be a good one. Hopefully the rest of the country lives up to this beautiful harbour city.