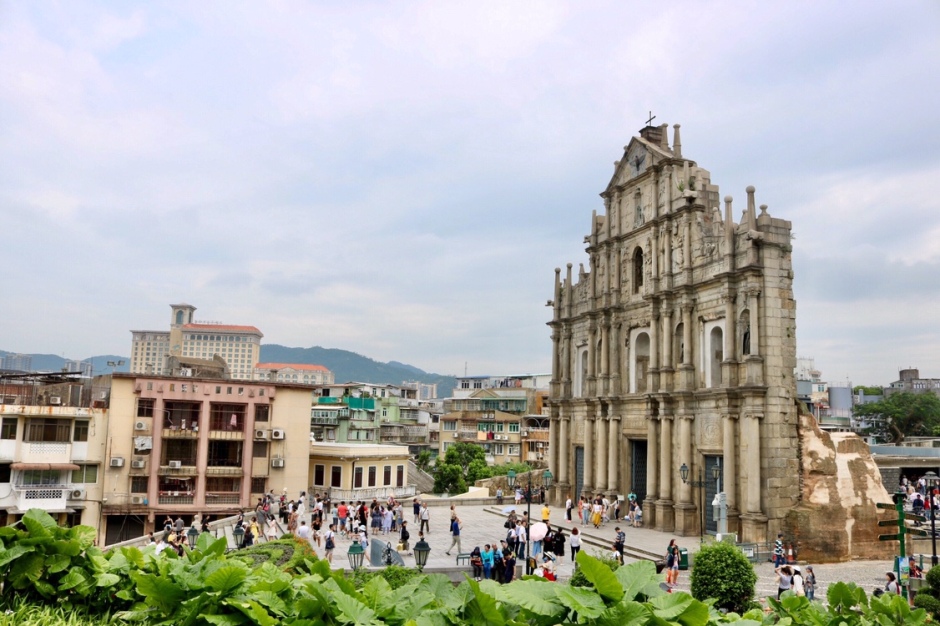 Located south of Mainland China is the gambling Mecca of the world, Macau. This was to be our home for one week and to our surprise we found a city that is so much more than just blackjack and roulette.

I had always heard that Macau is considered the “Las Vegas of the East”, and being a huge fan of Vegas and anything remotely associated to it, we could not pass up the opportunity of visiting Macau and experiencing the Asian Vegas. We were lucky to find a small two bedroom apartment through Airbnb (read our review here) within the UNESCO site of Senado Square. We literally only had to walk out our door to be smack bang in the middle of the historical urban centre of town, where the pastel coloured European buildings often seen in the Mediterranean, line the alleyways.

We were surprised to learn that Macau was only returned to Chinese rule in 1999, meaning that there is still a very strong Portuguese influence. This is evident with Portuguese widely spoken, signs written in Portuguese and cuisine from the European nation everywhere.

Thankfully the famous and very popular Portuguese egg tarts have remained in Macau and this pastry, with its flaky outer casing and creamy custard filling, is not going anywhere. After testing numerous tarts I could not decide on my favourite, so Paula and the boys set up a blind taste test for me (all in the name of science of course) to find my favourite.  In the end it was hard to separate them, however when pressed for a winner, the egg tart from Choi Heong Yuen Bakery came out on top.

The Ruins of St Paul’s was located a couple of hundred metres from our apartment. The church was originally built-in the early 17th century, however after being destroyed by a fire during a typhoon in 1835, all that remains now is the front facade. It has however, became Macau’s most famous landmark, and almost everyone who visits Macau stops by to take photographs of this precarious structure. It certainly did not matter if it was day or night, or even raining, there were always plenty of people there taking their own ‘postcard (or Instagram) pics’.

Above the ruins is the equally important historical site of Monte Forte. This fort, also built-in the early 17th century, was constructed to protect the population and was successful in defending the Dutch invasion in 1622. Watch towers and 32 cannons are strategically placed around the perimeter of the fort, which now looks out upon the mega casinos surrounding the city. In 1998, the barracks, which thirty years earlier had been converted into a weather observatory, was turned into the Museum of Macau. Due to some great planning by Paula (or just pure coincidence) we timed our visit to be on the 15th day of the month, when admission is free.

Carrying on with the free attractions we decided to also visit Guia Fortress, this hill has turned into a popular walking and running track with the locals. However it also includes a number of military tunnels that dive into the hillside, along with a lighthouse and small chapel at its peak. The children also managed to find a playground and despite the glaring heat, enjoyed running around for an hour or so. 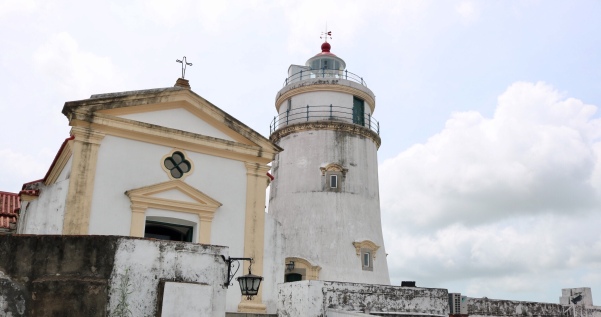 We definitely could not visit Macau without at least visiting some of the casinos, so we set aside a couple of days to check out a few.

The Venetian Macau, at 980,000 m2, is the largest casino in the world. It is also the largest single hotel building in Asia with 3,000 suites and the 7th largest building in the world by floor area. To say it is massive is an understatement, like the original (or “OG” as Lincoln would say) Venetian in Las Vegas, it contains man-made canals with gondola rides and a shopping precinct inside under a fake sky. 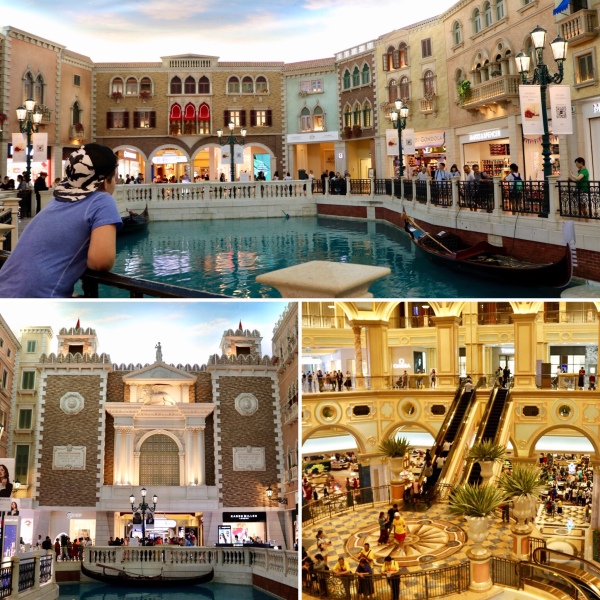 We also visited the very impressive Grand Lisboa which is shaped like a lotus flower and despite being the tallest building in Macau, and dominating the skyline from all directions, this “old school” Chinese casino is only a fraction of the size (floor area and suites) compared to the new casinos in town. 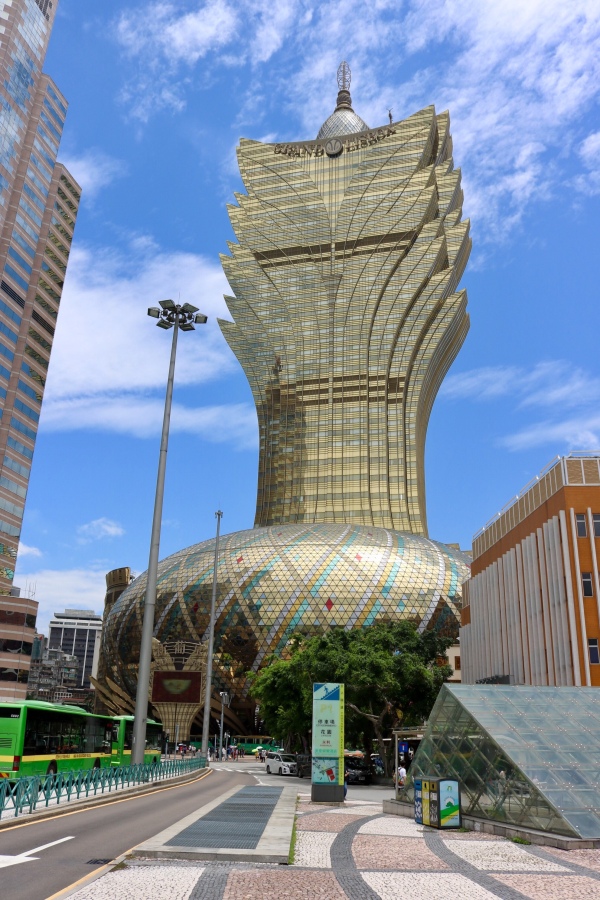 Next door is Wynn casino, and like The Venetian, it is modeled on its sister resort in Las Vegas. This casino is very opulent and includes a dancing fountain lake, thinking it would be like the Bellagio Fountains in Vegas, we were sorely disappointed as it was quite small in size and nowhere near as impressive.

Another attraction here is the ‘Dragon of Fortune’ show in the hotel atrium, which involves a 28ft dragon rising from below the floor. As soon as it started, tourists began to throw money at it for good luck and then even before the 5 minute show had finished, they rush off to the casino floor to throw down their first bet of the day. 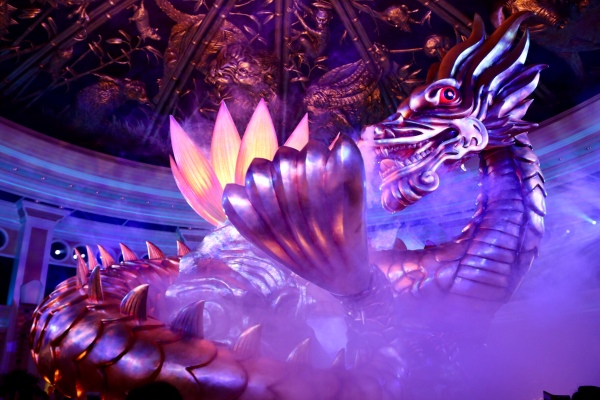 The final casino we visited was the MGM Macau, where I just happened to have a few “free play” vouchers entitling me to around $600 HKD ($110 NZD) to play with. So Paula kindly took the boys for an explore of the hotel while I had an opportunity to explore the casino floor and I could not help but compare it to Vegas.

First things first, Vegas has attitude and personality by the bucketloads, which is what I love about it. In Vegas gambling seems to come after entertainment and having a good time. Whereas in Macau, the punters are only there for one thing; which is gambling, as much and as fast as they can. No one is drinking, or no one that I saw anyway, and there is little-to-no noise, making it devoid of any real character. Plus the gambling here is expensive, and I mean really expensive, with minimum table bets of $300 HKD/$56 NZD. So I guess you want to be on your “A game” if you are laying down that sort of cash. Anyway, I had $400 HKD ($75 NZD) in slot machine money to use and $200 HKD in table credit. I managed to turn the slot money into a little over $1,000 HKD ($188 NZD) before turning my attention to the table credit. Although hesitant to stump up an extra $100 HKD/$19 NZD to make the minimum bet, I took the chance with my earlier winnings on Sic Bo, a three dice table game where you bet on what number or combination of numbers will show up on the dice. Not knowing why, I chose for there to be at least a 6 and a 1 showing at odds of 5 to 1. Surprisingly the numbers were 6, 5 and a 1, meaning a $1,500 HKD/$280 NZD win. With my initial bet still available I let it ride on the same numbers, but with only two 5’s and a 6 coming up next, that was the end of my very short winning streak. However with an extra $2,500 HKD ($470 NZD) in my pocket and no free play left, I called it a day; all within about 15 minutes after I had started. As I was walking out, I could not help but think about how far that money could go in Southeast Asia, and with 5 days coming up in Kuala Lumpur it proved more than enough to cover our accommodation and expenses.

So in the end we left Macau winners, and although Macau is definitely no Vegas, I see that as a good thing; as its history is reason enough for it to be put on many traveller’s “must-visit list”.

One thought on “Macau – Much More Than Just Casinos”