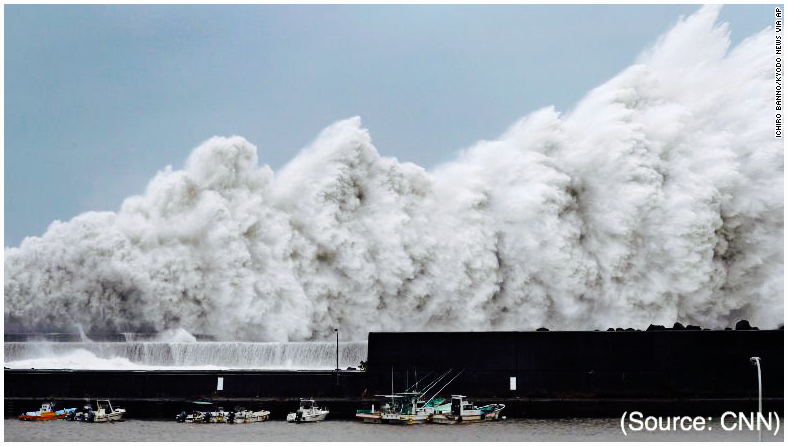 Leaving the Asian continent and heading to North America didn’t quite go as planned, and as travel days go, these few days have certainly gone straight to the top of our list of “most memorable”.

Our plan to get from Japan to Canada was going to take us a couple of days, but we hoped it would help us with the big change in time zones as we hadn’t really had any since leaving New Zealand. We had an eight-hour evening flight booked to depart from Osaka to Honolulu with Hawaiian Airlines. We would then land in Honolulu at 10.00am local time and we planned to spend the day at the beach, probably enjoying our last ocean swims for a while as we were heading into the North American autumn and winter. We then had another evening flight, nearly six hours long, with Air Canada from Honolulu that would have us arrive just before 7am in Vancouver.

However, Typhoon Jebi had other plans for us, and this is how it played out for us instead…

After 16 months, our time in Asia was coming to an end and during our last afternoon in Osaka we were on a train back to our apartment when we just happen to start talking to a man who advised us of an impending typhoon heading straight for the city. He worked for Japan Airlines and told us trains were going to stop running around 10am the following day as the typhoon was due to hit around 3pm.

We had been planning to take the train out to the airport the following day so once back at our apartment we started searching for information about the typhoon, trains and flights. Reading headlines like “strongest typhoon in 25 years to hit Japan” didn’t fill us with a lot of confidence and the weather maps had Osaka directly in the centre of the typhoon’s path. We decided we would head out to the airport early the next morning before the trains stopped so we would at least be in a large (and hopefully safe) structure during the nasty weather.

7.00am – We woke and saw an email from Hawaiian Airlines advising us that our 9.00pm flight had already been delayed until 11.30pm. We packed up and headed to our local train platform across the street from our accommodation. Soon we were at Osaka Station waiting for the train to the airport when there was an announcement that the 9.08am train (to the airport) had been cancelled. I checked with an information desk and learnt that there would be no more trains to the airport and we could possibly try a bus.

Over the next two hours we tried all transport options we could think of; other train lines, buses, the subway and even thoughts of hiring a vehicle with a group of others also trying to get to the airport. But as the rain and wind really began to set in, the city was shutting down in preparation and finally we got to the point that we had to take a taxi. It was a 40km trip and we had already been told the fare would be around 16,000 JPY/$210 NZD, but we were now left with no other option.

11.40am – Crossing the very exposed bridge to the airport (it’s located on an artificial island that we have since found out has been sinking for years) the taxi was being pushed around a lot but we were so relieved to finally arrive, and we were surprised when the fare ended up being only 12,720 JPY/$167 NZD. Inside we got ourselves some lunch, found a spot near some electrical plugs so we could stayed charged and settled in for our long wait.

2.00pm – Parts of the airport lost power and we lost all Wi-Fi connections. Japan was one country we hadn’t purchased a local SIM card on arrival, so we had no way to access outside information. The doors to the air bridges outside the airport had been closed due to the high winds and through some windows we could see trees being blown nearly horizontal.

We tried to keep ourselves occupied with our electronic devices, naps and walking around to see if there was any new information, but airport and airline staff didn’t really have much to tell us. 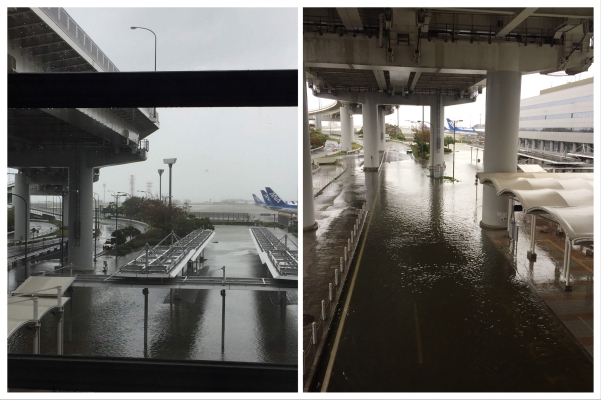 5.00pm – Most of the rain and wind had passed but there was extensive flooding to the runways and we found out that all flights had been cancelled and it could be days until the airport was operational again. More parts of the airport had lost power and the lost air conditioning was making the airport very stuffy.

5.15pm – We moved to an area near some open doors and that also had power and Logan headed to the only shop with power, a Lawsons convenience store, to try to get us some dinner. He waited in line for nearly two hours before he even made it into the shop itself and managed to get us some supplies.

7.30pm – We had purchased an unlimited data SIM from a vending machine (5000 JPY/$66 NZD) and finally got ourselves reconnected to the outside world, the signal was patchy so we had to stay in one spot when good connection was found. We made contact with parents back in New Zealand and my mum who was in Australia on holiday. Logan’s mum had been watching live camera feeds and told us a huge tanker ship had crashed into the only bridge that connected the airport with the mainland. She also made some calls for us as we tried to connect with our airlines and start looking at options to get out of Japan.

10.00pm – We set up a spot to get the boys to sleep and I returned to Lawsons to get a few more things to have on hand for the morning. However, they were closed and most of the shelves were bare. Any vending machines in areas that still had power had long lines and it wasn’t long before they were all empty as well.

Midnight – I tried to get some sleep but Logan was up and down all night and speaking to other travellers trying to get any other information as we weren’t getting any from the airport staff.

5.45am – Brian, someone Logan had met during his early morning walks, came and told us there was a line forming to get a ferry over to Kobe on the mainland. We woke the boys, quickly packed up and met them in the line. We have no idea when we might have learnt about this option to leave the airport as we still weren’t getting any information from staff. We were just very, very thankful that Brian had seen the line, asked what it was for and then let us know about it.

For the next three and a half hours we waited and slowly moved towards the front. Buses were taking people to the pier and the ferries (three were operating) would take around 100 people at a time over to Kobe. Brian’s partner, Carole and I went in search of food and found a line inside the airport where staff were handing out free bottles of water and food items. Logan remembered about vending machines he had spotted in the smoking rooms the previous day, went to check them and returned with four iced coffees.

9.00am – Finally we were in the next group to be getting on the buses!!

9.30am – On the ferry for the 30 minute trip over to Kobe and as we had taken the short drive from the airport terminal to the ferry we saw just how long the line was as it snaked around the airport buildings. We have no idea how long some of those people would have had to wait, but we were just so relived to finally be getting off the island.

10.00am – On the mainland and at Kobe airport we headed straight to the airline counters to try and get the earliest possible flight to Tokyo. There was one leaving at 11.00am with seats available so we were able to purchase tickets, get processed and straight on this flight.

12.15pm – We arrived at Tokyo’s Haneda Airport and began the task of finding flights. Communication with Hawaiian Airlines had been hard, their local call centre lines were busy, they didn’t have any staff on counters at the airport until after 6.00pm that evening and messages were slow to be responded to through Facebook Messenger. We checked with numerous airline counters and their direct flights from both of Tokyo’s international airports to Vancouver for the next couple of days were all $4,000 plus NZD each!! And while we were covered by travel insurance we just didn’t physically have enough credit card capacity to purchase those tickets there and then. Both my Dad and Logan’s parents were contacting New Zealand based call centres on our behalf trying to get us information and assistance as the SIM card we purchased didn’t give us the capacity to make, or even receive, calls.

5.30pm – After five hours of countless internet searches, numerous ups and downs, thinking we had a good solution only to have it taken away, we found a flight from Tokyo’s Narita Airport to Seattle (via Dallas) with American Airlines. These flights cost us a total of just over $4,600 NZD and while it was silly to be heading well past where we wanted to end up, it just had to be done. Over these hours the boys were just so incredible, looking after the bags and each other and keeping themselves amused so we could focus on trying to get us out of Japan.

6.00pm – We caught a bus from Haneda Airport to Narita Airport (80kms apart) and during the 90 minute journey we found a hotel near the airport to get a decent nights sleep.

8.00am – Awake and on the hotel shuttle heading to our 4th airport in the past 24 hours. We checked in, got some breakfast and booked a new Air Canada flight from Seattle to Vancouver (with the help of Mum and Dad’s credit card!!) Thank goodness for our parents, even though they were thousands of kilometres away, they helped us in so many ways.

As I finished up this post I checked the Kansai International Airport website and see that they have only been operating part of terminal 1 and the full area of terminal 2 since Friday 14 September and normal operation was due to start from Friday 21 September; however private cars are currently still not allowed to cross the access bridge. That is a heck of a long time for a major international airport but it just shows how much damage was done.

And as more of these strong weather systems continue to hit parts of Asia and other areas of the world, we are even more thankful that we were safe and well during Typhoon Jebi. While our original plans didn’t work, and we had moments of major frustration, in the end it was really only a few days of inconvenience.